How the Freeway System Shaped L.A. The daily nightmare of the Get Used to It San Diego Freeway.

The Pacific Electric Railway Company, nicknamed the Red Cars, was a privately owned mass transit system in Southern California consisting of electrically powered streetcars, interurban cars, and buses and was the largest electric railway system in the world in the 1920s.

Let alone how Los Angeles looked and felt before there was the massive freeway system.  I mean, was 5 o’clock rush hour basically hundreds of horse and carriages stuck at Getty Center Drive? Obviously yes. Yet in fact, there was no West LA to drive from and no North Hollywood to drive to. It wasn’t a matter of how the freeway system adapted to Los Angeles. It was more about how Los Angeles was forever changed by the freeway system itself. Back at two turns of the centuries ago, Los Angeles was a collection of small villages and enclaves, separated by orange groves, mountains, hills, lakes, parks and desert. Downtown Los Angeles was just Los Angeles and to get from Bunker Hill, one would get on the Red Car train and arrive at the windswept sands within the hour. Before Beverly Hills, rich celebrities and titans of industry lived in the very prosperous and stylish Hancock Park. Before the City of Santa Monica became ulta-fashionable and uber-expensive, the area was a casual beach community reserved for family beach goers, bohemian artists, and of course, the tad hedonistic. 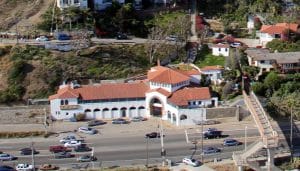 There was the Malibu Beach Club run by Silent Film star and producer Thelma Todd. Only the best of the best of the West would dress to the nines in true F.Scott Fitzgerald attire, balance a Martini by their little pinky and the requisite silver cigarette holder under their upper lip. Thelma Todd’s Sidewalk Café @ 17535 Pacific Coast Highway, Pacific Palisades was the Schwab’s hang-out and be discovered spot of its day. You never knew which then Hollywood mogul would come in for the shrimp cocktail. It could’ve been Charlie Chaplin or D.W. Griffith hisself. (not a typo) Going south on Pacific Coast Highway, envisioned in the World War One Era, State Route 1 (SR 1), as it was originally known by, is a major north–south state highway that runs along most of the Pacific coastline of the U.S. state of California. At a total of just over 656 miles (1,056 km), it is the longest state route in California. In those days, if you wanted to get from Santa Monica to, let’s say, Malibu, prior to Highway 1, you might as well took a boat. Once PCH was given its lifeblood and automobiles started to look like the butterfly emerging from the chrysalis of the dying Red Line, “intra-state” commerce began to take hold and soon enough beachside real estate became a very viable and desired premium. The daily nightmare of the Get Used to It San Diego Freeway.

The very dreaded San Diego Freeway I-405, is heavily traveled by both commuters and freight haulers along its entire length, and remains the busiest and most congested freeway in the United States. The freeway’s annual average daily traffic between exits 21 and 22 in Seal Beach reached 374,000 in 2008, making it the highest count in the nation. It has played a crucial role in the development of dozens of cities and suburbs along its route through Los Angeles and Orange counties. It also serves Los Angeles International Airport (LAX), Long Beach Airport (LGB) and Orange County’s John Wayne Airport (SNA). Sounds modern and romantic! And yet, being stuck on the San Diego Freeway as a possibility for anyone is right up there with a long term prison sentence, or even worse, stuck at a table with never ending babbler tabloidist gossip columnist for her day, Hedda Hopper, who really should’ve been renamed Hedda Galbler, the title character in the 19th Century play of the sane name by Henrik Ibsen.We Angelinos love our love/hate relationship with our freeways. They’re anything but. Not free at all. More like self-imposed standing in the corner. Still, without our freeways existence, Los Angeles wouldn’t just not have grown and indeed outgrown itself throughout the 50’s, 60’s and 70’s, and the city itself wouldn’t have the amazing kaleidoscopic self-identity as the world city it is today.

For 310 Cash for Cars, this is your roving reporter on the scene, looking lean and not too mean, Steven Alan Green