Sell A Car Los Angeles in Any Shape

The Capriciousness of Life.

Venice The Capriciousness of Life.

I was down in Venice yesterday on a foggy Saturday morning, down there to attend a training video for a new food processor I’ve been hired to test.

I parked on Sunset near 4th Avenue, not far from Gjusta, where I went to eat. They sell loaves of bread for ten dollars there.

And along Sunset I passed a man and a woman and a tent, their home I assumed. I ignored them and went to the restaurant and ordered eggs, toast and coffee for $ 16.

On the way back, the man and the woman had moved, and set up their tent on 4th Avenue.

Camera in hand, I went over to introduce myself. 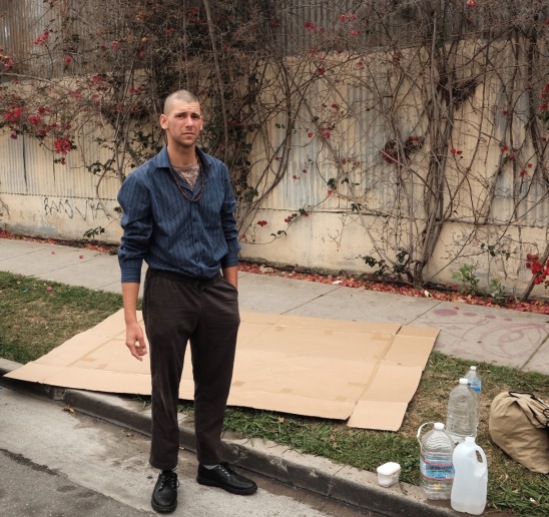 The man, Alexander, said he was from Pomona and was 22-years-old. The woman, Dina, said she was 44 and from Egypt. They both said they met in Israel.

They said they were artists. And they had ended up here and had no means of supporting themselves, so they were living in the tent, on the sidewalk, chased away by residents and police.

Alexander was smart, funny, articulate and intelligent. He said he was Jewish, an anomaly in Catholic and Hispanic Pomona. Dina said she grew up in Egypt, a Muslim, and her father was blacklisted for writing against the regime. She said she had children in Israel.

Alexander told me that the hardest part of being homeless was how exhausting it was. They had to be constantly moving, like Bedouins, and forage for food. Cleaning up was not easy, they washed their hands along the curb. Yet they seemed clean.

“Capitalism can be cruel. Even in poorer countries, people seem to look out for each other, to help. In America, the indifference is noticeable,” Alexander said.

“All of my family live in the same compound,” Dina said, thinking of her kin back home. And what would they think of her now?

Dina had the flinty, tough, tenacious soul of a woman from the Middle-East. She was genuinely touched that I cared enough to stop and speak with her, and discuss her plight and struggle.

They both said they needed a backyard to stay in. That would help them feel settled. I wondered why there was not a place in Venice or Santa Monica, in a community full of backyards, where one couple could camp out temporarily.

I don’t exactly understand how they got into this position, but I am sure that life doesn’t always reward the moral and punish the immoral.

Sometimes it is capricious, and good people end up in bad places, and if they are lucky enough, can dig out and get back on their feet.

But why is it that nobody can lend them a backyard and few bucks?

A few blocks from Dina and Alexander, Google is building a new office. And a friend of my brother rents a small apartment on Rose for $ 4,500 a month.

And Dina and Alexander sleep in a tent on the sidewalk while all around them humanity passes by.